The Infiltrator is a type of Terminator that features a human appearance, created by Skynet to mimic humans and infiltrate the Resistance.

An Infiltrator is usually a Humanoid Terminator with an outer sheath of human appearance, in order for a machine to infiltrate human groups.

If the CPU is set to read-write, an Infiltrator can become more human-like and even blend in human society. [1]

Some Terminator Series can consume sustenance. Cameron, a T-900 from The Sarah Connor Chronicles timeline, is capable of eating a corn chip[2] and later a piece of a pancake.[3] The T-1001 is also shown to have this capability.[Episode needed] The T-888 presumably consumes food, given Vick Chamberlain's ability to maintain a human cover for years while married to a human woman.

The T-800 Infiltrator was the first truly successful Infiltrator unit, consisting of living tissue over a metal endoskeleton. Such Infiltrator features every human feature, including hair, blood, tear, sweat and bad breath. Some of the units can even highly mimic human emotion and behaviors, such as Carl.

In the Rise of the Machines timeline, Skynet created the T-X Terminatrix, which used mimetic polyalloy as outer sheath over an advanced metal endoskeleton that featured various onboard weapons, such as plasma weaponry and flamethrower. In the Dark Fate timeline, Legion applied a similar design concept to develop Rev-9, an Infiltrator made of a carbon-based endoskeleton covered by mimetic polyalloy, able to separate into two units. Rev-9 featured a more convincing human behavior mimicry.

The T-799 "Eve" was the first Infiltrator prototype with living tissue over a metal endoskeleton in The New John Connor Chronicles timeline.

In the Salvation timeline, Skynet used the research from Cyberdyne Systems to create T-H Hybrid Human as the Infiltration Prototype before it could develop the Terminator Resistance Infiltrator Prototype (T-RIP). Near the end of Future War, Skynet developed New Terminator, which was able to mimic human emotion, and even thinking about the concept of aesthetics. 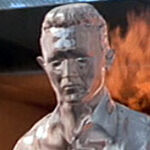 Additional research was put forward into increasingly-organic Terminators able to more efficiently evade detection and infiltrate human organizations, such as the TS-300 Stealth Terminator created by MIR, the T-900, and the I-950 Infiltrator.

Despite being designed without the ceramic endoskeleton, the T-900 Infiltrator from Terminator: The Sarah Connor Chronicles timeline is able to copy and possess the personality, along with the memory, from the target for replacement. In addition, it can highly mimic human behaviors and emotions.

Unlike other Terminators, the I-950 Infiltrator from T2 Trilogy timeline was born rather than created with technological enhancements added over time; the I-950 starts out as a baby with a neural net processor attached to the brain, providing an uplink to Skynet. Because of I-950's almost purely-organic nature, it is harder to detect using metal detectors and is undetected by dogs.

In Salvation timeline, Skynet developed T-H Hybrid Human by transferring the brain and organs from a human body to an endoskeleton from the R&D left by Cyberdyne Systems. Thus, a T-H possesses every aspect of a human and is utilized as an Infiltration Prototype.

In Salvation timeline, Skynet developed New Terminators from T-800. A New Terminator features more human emotion and behaviour mimicry than its predecessor, even capable of lying or discussing, debating with humans.

Near the end of the war, Skynet tried to create a new breed of Infiltrator, known as the T-3000, made of humans transformed through exposure to a type of machine phase matter. All of the converted humans went insane and died, however, but Skynet successfully converted John Connor into one T-3000. It had abilities similar to a T-1000 while still retaining his own memory, knowledge and personality, though loyal to Skynet, of his human self, making him able to perfectly blend in with humans. It proved to be nearly impossible to destroy as well.

Kyle Reese: The 600 series had rubber skin. We spotted them easy, but these are new. They look human - sweat, bad breath, everything. Very hard to spot. I had to wait till he moved on you before I could zero him.
The Terminator