United States military (formerly)
Resistance
General Hugh Ashdown was the original leader of the Resistance in the Salvation timeline.

Ashdown was a career soldier in service of the United States of America. He was a veteran commander who was affectionately known to his men as "Old Ironsides". Ashdown, in time, ascended to become a 4-Star General based at the Pentagon, and became one of the U.S. military's highest-ranking generals.

Ashdown was among the majority of the military and government leadership who believed in the Skynet initiative — to give a military artificial intelligence complete oversight of U.S. defense operations, was truly the future of the U.S. military. At the Pentagon and elsewhere, Ashdown vehemently argued for funding and support for the designing and implementation of the Skynet Battlefield Management Network.

Ashdown was conducting an inspection tour aboard a brand-new Los Angeles-class nuclear submarine; the USS Wilmington, when Skynet was brought on-line. Unfortunately, upon the activation of the Skynet Defense System, Skynet almost immediately launched nuclear warheads to terminate what it perceived to be the greatest threat to its existence — humankind.

Ashdown witnesses the Uprising at Edwards, where the prototype Terminators rose up and massacred the population of the base and monitored the global situation from the safety of the Wilmington.

Ashdown experienced a personal blow when the base in Alaska that his son was stationed at was destroyed by a nuclear bomb — fired by Captain Dmitri Losenko in response to the, apparent, American assault. Ashdown never got the chance to say goodbye to his son. Terminator Salvation: Cold War

Ashdown, recognizing that "Skynet tore the guts out of mankind's military", utilized the Wilmington as his base-of-operations and immediately dispatched a non-stop message explaining that Skynet was truly responsible for the destruction. Ashdown also assembled a military force from the remnants of the U.S. military to begin the foundations of the Resistance.

Ashdown called a global secret summit of surviving military leaders across the world at the Gallapogos, dispatching and summoning any and all remaining professional officers, including those who were on leave, retire, on in-active service, stationed in low-priority areas, with Ashdown believing and insisting these Resistance leaders were mankind's last hope. By this point, Ashdown heard of John Connor's radio broadcasts also explaining Skynet's existence in far greater detail, as well as information necessary for the survivors' continued survival. Unfortunately, Ashdown was largely dismissive of Connor, as he was not a part of the Resistance's command structure, and instead considered him a "well-informed civilian" at best and "a scrappy fugitive" at worst.

At the newly established Resistance Headquarters (formerly the Charles Darwin Research Station), Ashdown gave a presentation to the assembled military leaders of the events leading to Judgment Day, and called for a united effort to destroy Skynet. Ashdown, by this point, was tired of answering queries of Connor's presence, and instead made it clear his belief that "amateur civilians" and "backyard saboteurs" would not win the war, but rather a professional army and navy commanded by officers like them would. This casual dismissal of civilian militias was dangerous in their new turbulent times due to Ashdown's being "too career brass" to alter his way of thinking following Skynet's upheaval and redundancy of standard military procedure.

The summit, however, was fraught with in-decision, skepticism, lingering animosity and in-fighting, and in the end largely collapsed, with most of the delegates leaving to fight Skynet on their own. Ashdown, himself, was confident they would return when the Terminator attacks on their territories began. Ashdown was thankful to those who stayed, and upon election, promised he would do his best to bring Skynet down.

One of Ashdown's first decisions as the Resistance's commanding officer was to appoint Losenko, who had attended the summit after being told about it by one of Ashdown's loyal soldiers, as a member of his staff — Resistance Central Command — specifically as his Second-in-Command. Losenko had, by this time, admitted his part in the death of Ashdown's son, and, while Ashdown was pained by this knowledge and a part of him wasn't looking forward to working with him everyday, Ashdown, nevertheless, some-what recognized the new world they were fighting for, and, recognizing his own arrogance and problems with out-of-the-box thinking, respected Losenko's own opposite beliefs (Ashdown not needing "a yes-man") and saw they were necessary. By the authority just vested in him, Ashdown appointed Losenko a Resistance General then and there.

Resistance Headquarters was bombed and exposed to Skynet's forces to be attacked; all by one of the delegates Bela Utyosov, a decorated retired Russian captain and Losenko's old friend who was forced to become a human collaborator in exchange for the continued survival of Bela's doomed granddaughter Anastasia. Losenko killed Bela, and both he and Ashdown and the Resistance forces escaped aboard the USS Wilmington. Afterwards, Ashdown recognized the land was too dangerous for the Resistance leadership, and instead made the decision to have the Wilmington serve as Resistance Headquarters from that point.

The War against the Machines[]

Over the next fifteen years, Ashdown directed the war against Skynet from the USS Wilmington. By this point, his judgment had become more impaired. He was determined to exploit a mysterious code signal inside Skynet's machines in order to shut down and destroy Skynet. When the code was finally found, Connor, who by this point had enlisted in the Resistance and served as commanding officer of his own force and base, forcibly boarded the Wilmington to demand answers as to the purpose of the assault to gain the code located in a Skynet VLA that self-destructed with him as the only survivor.

Upon being ushered into a meeting with Command, Ashdown voiced his opinion that Connor had endangered the lives of every man and woman on the Wilmington with "his little frog-man stunt". Ashdown surprised Connor by revealing he was aware Connor was prophesied to succeed Ashdown as leader of the Resistance - amongst the gathered intelligence aboard the sub was information detailing the events involving Sarah Connor in 1984. However, Ashdown didn't believe the prophecy as destiny could be changed in a second (demonstrated by Ashdown drawing his service pistol and pointing it at Connor's head briefly). At the same time, however, he begrudgingly acknowledged that he himself appreciated everything Connor had done for the Resistance.

Ashdown initially wanted to brief Connor on a need-to-know basis about the code, but Losenko, more supportive and respectful of Connor, told him anyway. Ashdown discredited Connor's claims that the new model Terminator would be any threat, despite their earlier development, as the Resistance had now developed the code into a new weapon against Skynet capable of shutting the machines down. Ashdown was motivated by Losenko to provide Connor with a copy of the code for field testing, and said they would mount a world-wide assault on Skynet in four days. Losenko explained this rushed assault was not just because of the code's discovery — a kill-list was intercepted from Skynet saying matter-of-factly that everyone on it, including Ashdown and Command, would be dead by week's end. Connor was Number 2 on the list. An unknown civilian Resistance member named Kyle Reese was Number 1.

On the day of the assault, which Ashdown insisted commence after the apparently successful test of the code, Connor pleaded that they delay the attack so Connor could effect a rescue mission for human prisoners inside Skynet Central. Ashdown however, dismissed the prisoners' certain deaths as collateral damage, and, learning Reese was among the prisoners, Ashdown was content to leave him to his fate. Ashdown and Connor got into a heated argument, which Ashdown ended by declaring, as of that moment, Connor was relieved of his command and was no longer a part of the Resistance. Connor, of course, ignored this order, as did the rest of his men.

Ashdown activated the code signal aboard the USS Wilmington and ordered the bombing of Skynet Central, only to find the Resistance refusing to acknowledge his orders and standing down. Ashdown realized that the Resistance was no longer under his control - but Connor was. Ashdown and the rest of Command kept trying to order the attack, until they discovered an HK approaching the Wilmington. The code had been a deception and the machines were using the signal to triangulate the submarine's position. Losenko told a horrified Ashdown that they had destroyed themselves - the signal was, indeed, a Skynet trap, and Connor was right all along. The HK fired a single torpedo that struck and destroyed the Wilmington with all hands - including Ashdown. Terminator Salvation

Ashdown, as prophesied, was succeeded as Commander of the Resistance by Connor. 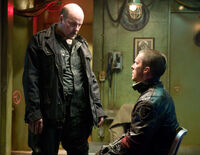 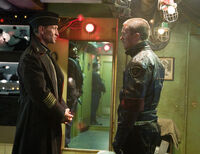