A Harvester is a large, bipedal Non-Humanoid Hunter Killer unit produced by Skynet sometime before 2016. Its primary function is to capture humans for the machines to do lab testing on their stem cells. This research on humans led to the creation of the Series 800 Terminator.

Located on the back left of the Harvester is a large-scale, electrically-charged plasma cannon, which obliterates its targets upon contact. A Harvester can withstand massive amounts of concentrated heat on any part of it and has very thick armor on its torso and outer shoulders. It also has no head, unlike most other semi-humanoid ground units, making for one less weak spot.

While the Harvester can use its large arms for just about anything, it relies mainly on the two smaller-scale grappling arms located near the bottom of its torso for grabbing humans when in a kneeled position.

A Harvester is able to store at least two Moto-Terminators in the lower front part of its legs. It will release these Moto-Terminators to chase escaping humans as the Harvester itself is too large and lumbering to effectively pursue them. When the Harvester has gathered a full load of humans for the Transport, it will position itself in a storage compartment on top of the Transport and return with it to its home base.

While in a gasoline station, the Harvester suddenly shows up and captures Virginia along with several other Resistance members before firing at those who try to escape. Marcus Wright, Kyle Reese and Star manage to escape and use a tank lorry to blast the Harvester.

However, the Harvester was unharmed and fired a blast at them, but missed. It then releases two Moto-Terminators to chase them.

Harvester
(2009)
Add a photo to this gallery 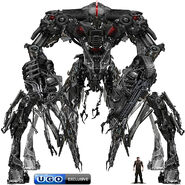 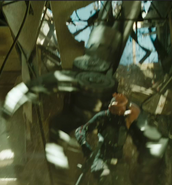 Retrieved from "https://terminator.fandom.com/wiki/Harvester?oldid=104095"
Community content is available under CC-BY-SA unless otherwise noted.