HK-VTOL refers to the upgraded Skynet twin-engine airborne Aerial Hunter-Killers from The Sarah Connor Chronicles timeline. Derived from the original HK-Drone, it retains the form and a similar maneuvering system but on a much larger scale. Sleeker and more organic in appearance than the HK-Aerial, the VTOL is an agile hunter with a single underslung Plasma cannon, the HK-VTOL is fearsome and terrifying to behold. Often operating in support of ground sweeps by swarms of Series 888 endoskeletons, they are one of the more dangerous targets for Resistance fighters to engage.

HK-VTOLs can be brought down by shoulder fired surface to air missiles, captured plasma weaponry, and even anti-material rifles. [1]

Continually engineering upgrades to the original design, the latest air unit is a sleeker, more organic design[2] powerful enough to carry a Boeing 747 jet engine in a cargo sling. 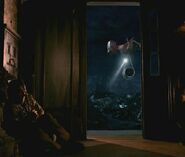 Retrieved from "https://terminator.fandom.com/wiki/HK-VTOL?oldid=93540"
Community content is available under CC-BY-SA unless otherwise noted.