With the increase of effective anti-HK tactics used by the Resistance to not only disable these units but to scavenge them for heavy weapons, power sources and armor, Skynet has started equipping some units with crew compartments, containing concealed endoskeletons to counterattack the human assault teams.[3]

Kyle Reese and Corporal Ferro were trying to toss canister bombs to destroy an HK-Tank. Kyle tossed the charge successfully, but the other did not, and was killed by the HK-Tank. The HK-Tank was destroyed after a while when running over the charge tossed by Kyle.

Many Resistance soldiers were in the middle of a battle and fighting HK-Aerials and HK-Tanks.

Derek Reese and Martin Bedell were trying to destroy the "Ogre". Martin decided to carry the bomb to destroy the machine. He successfully destroys the Ogre, but lost his life. "Goodbye to All That"

An HK-Tank was reprogrammed by John Connor and made to go to Skynet Central as cover for a rescue operation that John was attempting, but the tank was damaged by Terminators and turrets defending Skynet Central. Terminator Salvation (video game)

Several HK-Tanks are deployed by Skynet with at least two fought as bosses. One in the ruins of Los Angeles and another in the final battle against Skynet. The first HK-Tank is destroyed without support by stunning it with rocket launcher while also shooting it from behind at an exposed panel. This, along with several certain security codes obtained from them, enables the Resistance to reprogram and utilise one HK-Tank for themselves for the final assault on Skynet. Terminator: Resistance

In Bakersfield, there was a Skynet junkyard filled with the wrecks of many defective machines, HK-Tanks among them. One HK-Tank was deployed by Skynet to aid in the capture and killing of civilians that escaped from a Work Camp. The Tank soon became a problem for Kyle Reese and his team. At first, they tried to avoid it as they rescued various civilians from Skynet's forces, but later they had no option but to destroy it. Reese ordered Jacob Rivers to find an overwatch position while he and Ferro would move to destroy the Tank with can grenades. Under the watch of Jacob, Reese and Ferro got close enough to the HK-Tank. Reese successfully tossed his grenade, but before Ferro could toss hers, she was spotted by the HK-Tank and blasted by it. As Reese ran from the HK-Tank, the grenade detonated, destroying the HK-Tank. Terminator: Resistance [Annihilation Line]

An HK-Tank in the year 2032 from the game Terminator 3: War of the Machines

Concept art for the HK-Tank in the film Terminator Salvation. 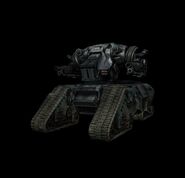 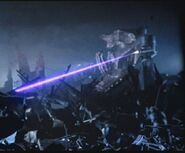 Terminator 3: War of the Machines

Terminator 3: War of the Machines 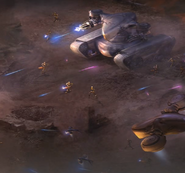 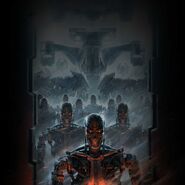