HK-Spider Tank is a quadruped walker-style ground Non-Humanoid Hunter Killer unit developed by Skynet. Like its namesake arachnid, a Spider Tank is nimble and capable of leaping into the air.

Utilizing legs for added locomotion, the Spider will commonly make swiping hits at Resistance Soldiers or Refugees to disable them for capture or termination. Spider Tank feature two plasma turrets and a shield generator for added protection.

Spider Tanks were first deployed when Catherine Luna was on her way to rescue Kyle Reese. Later, Kyle Reese faced off against Spider Tanks while on a mission to destroy Skynet Brain, the AI's central processor, in Cheyenne Mountain. 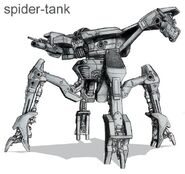 Retrieved from "https://terminator.fandom.com/wiki/HK-Spider_Tank?oldid=92488"
Community content is available under CC-BY-SA unless otherwise noted.