The Glock is a family of semi-automatic and machine pistols that uses a modified Browning locked breech short recoil operating principle. The Glock 17 features heavily in promotional material for Terminator: The Sarah Connor Chronicles and is used often by several characters on screen, Cameron and Sarah Connor especially. The Glock 17 has also appeared in the hands of various other characters throughout the series, though it's prevalence is offset by the Beretta and Colt models used interchangeably by the main characters.

Oscar Cruz pull a 9mm Glock from his desk drawer. Hour of the Wolf

Terminator 3: Rise of the MachinesEdit

While in the mausoleum where Sarah Connor's weapons were stashed, Kate Brewster took a Glock 19 and aimed at the T-850, warning the machine. She accidentally shot the T-850, but the bullet was caught in its mouth.

After the SWAT arrived outside the mausoleum, the T-850 loaded a high-capacity magazine into the Glock 18, which later was used by John Connor against the T-X in Crystal Peak.

When the T-850 stated it would take Connor and Brewster to Mexico before Judgment Day, John Connor insisted they should go to Edwards Air Force Base to stop Skynet and threatened the Terminator to shoot himself in the head with a Glock 36 if it refused to follow his order. Terminator 3: Rise of the Machines

When it first acquire John Connor, Cromartie used a Glock 17 which was hidden in its leg. Pilot episode of Terminator: The Sarah Connor Chronicles

After finding out Enrique Salceda was actually an informant of FBI and tried to give Sarah Connor's information to the bureau, Cameron killed Enrique with a Glock 17. "Gnothi Seauton"

A silenced variant was used by Derek to assassinate Andy Goode.

Fake Sarkissian used a Glock 17 to hold John Connor as hostage. "What He Beheld"

During a raid in an attempt take down Cromartie, James Ellison was using a Glock 17, which was also used by Cromartie during the time. "What He Beheld"

Glock was used by Margos Sarkissian's thug during a house raid. The same weapon was then used by Cameron after having killed the thug and it was very nearly the gun that took John Connor's life after Cameron went rogue due to a glitch caused by car bomb. It was later recovered by Derek Reese during his search of the burnt-out house whilst disguised as a fireman. John used this gun to keep Sarah and Derek from interfering with Cameron's reactivation and gave it to her as a sign of trust, after which she returned it and he subsequently threw the gun back to Sarah. "Samson & Delilah"

When the FBI were going to arrest Sarah Connor, one of the agent held a Glock 17 at her. "Adam Raised a Cain"

While being attacked by the T-3000 John Connor, Kyle Reese was armed with a Glock 17 in a school bus on the Golden Gate Bridge in San Francisco. Terminator Genisys

When infiltrating the USBP detention center, the Rev-9 handed in its Glock 17, possibly stolen from murdered Border Patrol Agents, in the reception.

While escaping from the detention center, both Sarah Connor and Grace Harper took Glock 17 pistols from Border Patrol Agents.

Later at Carl's shooting range, Dani Ramos once used a Glock 17 to practice.

Major Dean also carried a Glock 17, which he used to return fire to the Rev-9, who was attacking the group from a stolen police helicopter. Terminator: Dark Fate

Cromartie with a Glock 17 "Pilot"

Cromartie with a Glock 17 "What He Beheld"

Sarah holding her Glock 17 "What He Beheld"

Cameron with a Glock 17 "Samson & Delilah"

Charley Dixon is given Sarah's Glock 17 during the Michelle rescue attempt. "The Mousetrap"

Sarah pulls her Glock 17 and threatens Moishe. "Brothers of Nablus" 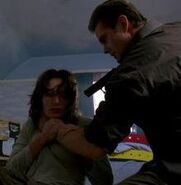 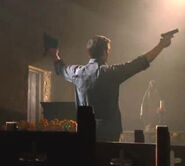 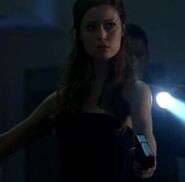 Sarah holding a Glock 17 taken from a sheriff's deputy. "The Good Wound" 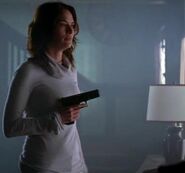 Sarah with a Glock 17. "Ourselves Alone"

Cameron with a Glock 17, but knock offline. "To the Lighthouse"

A Glock 17 was held at Sarah. "Adam Raised a Cain"

Kyle Reese with a Glock 17. Terminator Genisys
Add a photo to this gallery

(Eric accidently knocks over Cameron's bag and picks up her gun)
Eric: What is this?
Cameron: A 17-round Glock nine millimeter semi-automatic.
Eric: Why do you have it?
Cameron: In case I need it.
Eric: Have you ever used it?
Cameron: Yes.
Terminator: The Sarah Connor Chronicles ("Self Made Man")

Retrieved from "https://terminator.fandom.com/wiki/Glock?oldid=103067"
Community content is available under CC-BY-SA unless otherwise noted.