Garret Dillahunt was born on November 24, 1964 in Castro Valley, California. He grew up in the state of Washington and attended the University of Washington where he studied journalism. He changed direction at New York University in their graduate acting program. He appeared extensively on and off Broadway and around the country before he began pursuing film and television roles. Garret is married to Michelle Hurd and has siblings Brett, a teacher, and Eric, who passed away.[1] 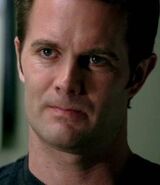 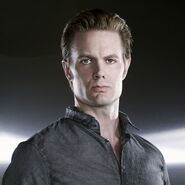 Notable television appearances include his portrayal of two distinct characters in the first two seasons of HBO series Deadwood as Jack McCall in 2004 and Francis Wolcott in 2005.

His film roles involved playing Ed Miller in The Assassination of Jesse James by the Coward Robert Ford and Deputy Wendell in the 2007 Coen brothers' release, No Country For Old Men.

In 1995 he Supported Frank Langella in the Broadway revival of The Father, and in 2000 was featured in the Off-Broadway play The Beginning of August.[2] He has performed extensively on and off Broadway with respected theater companies such as Steppenwolf, ACT San Francisco, Seattle Rep, Huntington Stage, Williamstown, and the Berkshire Theater Festival.[3]

On January 27, 2008 the cast of No Country For Old Men won the Outstanding Performance by a Cast in a Motion Picture Award from SAG (Screen Actors Guild).