The FK Reaper, or Reaper class assault machine, was a bipedal HK unit utilized by Skynet in the alternate future of Terminator 3: The Redemption.

An FK Reaper possessed four optical sensors and an arsenal comprising a heavy plasma gun and a flamethrower.

The FK Reaper is apparently compatible with T-850 CPUs, allowing John Connor to install the chip of his protector into one such unit. 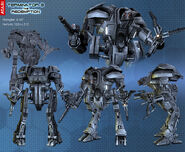 The T-850 in the FK Reaper
Add a photo to this gallery
Retrieved from "https://terminator.fandom.com/wiki/FK_Reaper?oldid=100204"
Community content is available under CC-BY-SA unless otherwise noted.