Paul Winfield
Ed Traxler was a hard-working, pragmatic, honest cop and a detective lieutenant of the Los Angeles Police Department in 1984 and was one of the investigators assigned to the Phone Book Killer case.

As of 1984, Ed Traxler was a hard-working, pragmatic, honest cop about seven years from retirement. He was a seasoned lieutenant of the Los Angeles Police Department and worked as a homicide detective alongside Hal Vukovich.

Ed was at the police station drinking coffee and casually ignoring a violent criminal who was refusing to be sat down in a cell. His partner Hal Vukovich gave him a file on two Sarah Connors who had been killed. Traxler failed to see the connection at first until Hal showed him their names. Traxler said that this was a "one-day pattern" killer.

At about 9:40 pm that night, the phone book killer case drew many news paper interviewer's to the station which Hal said, "Oh shit". The interviewers tried to get answers, but Traxler turned them down, much to their annoyance. Ed asked Hal if he had reached the next girl yet, but Hal said he just got her answering machine. Ed told him to send a unit but there was no answer but Hal did have the unit remain outside the house. Traxler had Hal call her again while asking for a smoke, not noticing that he was holding one already, but it was revealed on the other end that Ginger Ventura and Matt Buchanan in Sarah's house were having sex and did not answer it.

Sarah wasn't even there as she went out after being turned down on a date. Ed decided to give a statement to the interviewers who were still outside his office to get Sarah to call them and get a hold of her. He asked Hal if he looked appropriate for the camera. Hal said he looked like shit. Ed said, "Your mama." Ed later got the call he was expecting from Sarah Connor from the bar Tech Noir. She told him that someone might be following her. He told her to stay visible till a car got there.

Ed and Hal found out that Sarah had been abducted by Kyle Reese (whom they believed to be the killer at first) and headed out in a car to find him. After arriving at the apartment, Traxler noticed Sarah in a car with Reese and told a nearby police car to follow him and prepared to follow themselves.[2]

Ed later discovered Ginger and Matt's bodies at the apartment who had been killed by the T-800. The police found Sarah and brought her and Reese to the station. Sarah was told of Ginger and Matt's deaths and burst into tears. Traxler comforted her as she cried. Traxler even gave her his coffee. Traxler told Sarah to tell Dr. Peter Silberman everything Reese told her. Silberman interviewed Kyle Reese and Kyle told Silberman the truth: he was a soldier from the future sent by John Connor to protect Sarah. While his colleagues Hal and especially Peter Silberman simply assumed Kyle Reese was crazy or on drugs, Ed was more sympathetic to him and Sarah Connor and appeared to be at least somewhat persuaded by his argument.

After seeing Silberman question Reese, Traxler and Hal stepped out for a break. Ed contemplated the interrogation in his head. Hal suspected that Traxler believed Reese and tried to talk sense into him. Hal said "Come on Ed, that was moon talk. The guy's a wacko". When Traxler responded with, "He better be.", Hal began to realise after this conversation, that even he could not rule out he may have told the truth.[2]

After Silberman interrogated Reese, Ed, Hal, Sarah, Silberman, and an unknown police officer watched the interrogation on a television. Ed still seemed to believe the statement Reese made while everyone else was still unconvinced. Ed told Silberman to stop the recording when Reese started talking about the Terminator killing Sarah by ripping out her heart. Hal gave Ed a bullet proof vest. Ed showed it to Sarah and her told her that the murderer must have been wearing one to avoid being killed by Reese's gunshots. Ed told Sarah to sleep on the couch until her mother arrived. Ed told her to sleep on the couch and not worry as 30 cops were on guard in the building.

When the T-800 raided the police station, Ed was one of the officers to fight against it. He locked Sarah in a room to stop the T-800 from getting to her and hid with a rifle in a room down the hall waiting for the T-800. He opened fire on the Terminator, but the machine returned fire and shot Ed multiple times in the chest, severely wounding him. Ed, wounded, laid next to a filing cabinet when Hal found him and open fired on the Terminator in rage but was also shot by the machine. In a deleted scene, he gives a snub-nosed Ruger Security Six revolver to Kyle and Sarah as they flee the station, telling Kyle the future depends on him protecting Sarah.

Traxler presumably died from the injuries he received.[3] The Terminator 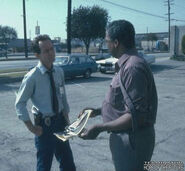