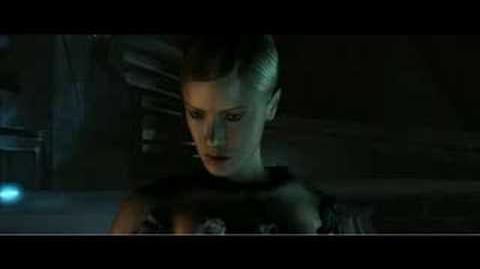 The Continuum Transporter[1] is a time traveling machine in Rise of the Machines timeline and it is an equivalent to the Time Displacement Equipment from the Original timeline. During the Future War, there are two Continuum Transporters, one controlled by the Resistance in the desert east of Los Angeles, while the other by Skynet under Navajo Mountain Strategic Region[1] of the Rocky Mountains, west of Colorado Springs, near Pikes Peak.[2]

Prior to Judgement[edit | edit source]

The Continuum Transporter began as a series of Special Action Projects (SAPs) carried out at the United States Air Force's high security research and test base Area 51 in the Nevada desert. Funded by the Department of Defense, Central Intelligence Agency, National Reconnaissance Office, and National Security Agency, it was able to create an artificial wormhole — a passageway through space-time. Albert Einstein and Stephen Hawking had worked on the problem in the past, but it appeared to need too much energy to be possible. By most calculations, the wattage required to create an infinitesimally tiny wormhole would take almost all the energy ever produced in the universe since the moment of the Big Bang. However, an Oxford graduate student developed a mathematical model, melding Albert Einstein's special relativity with Werner Heisenberg's quantum mechanics, creating a 10-Dimensional wormhole at the superstring level. It would produce a passageway that would automatically expand exponentially like a virus gone wild. However, only so long as power was applied to what was thought of as an artificial singularity.[1]

In the mid-1990s, under the guise of launching of dozens of military and NSA technical-mean satellites, a solar sail made of extremely thin BoPET film, 200 kilometers each side, was positioned in an extremely rare geosynchronous orbit that kept it stationary over the North Pole. The sail focused sunlight, beaming it to the reception antenna and singularity equipment at the Cyber Research Systems facility on the desert east of Los Angeles. Capable of transporting several hundred terawatts of energy over time periods of less than one nanosecond, a wormhole could be opened.[1]

By the time of 2029 in Kyla's World, the Continuum Transporter under the old Cyber Research Systems facility in the Edwards Air Force Base was utilized by the Resistance and John Connon had sent Kyle Reese and the reprogrammed T-800 to 1984 and 1994 respectively.[3] Later, after learning that Skynet had developed a new model of Terminator — the T-X —, John Connor decided to go to the CRS main facility again in order to activated a T-850 and sent it to 2003.[1] Skynet lacked the knowledge of Continuum Transporter utilized by the Resistance due to the "sabotage" programming of Daniel Avila in 2004.[3][2]

On the other hand, Skynet used its own Continuum Transporter in Navajo Mountain to send a T-X to 2003 from 2029 in order to terminate John Connor's lieutenants.[1]

Retrieved from "https://terminator.fandom.com/wiki/Continuum_Transporter?oldid=102434"
Community content is available under CC-BY-SA unless otherwise noted.