Actor & producer
Brian Austin Green is an American actor who portrays Derek Reese, a member of John Connor's resistance and the brother of John's father Kyle Reese, in the television series Terminator: The Sarah Connor Chronicles.

One of Brian Austin Green's first roles was when he played Brian Cunningham for three years (1986-1989) on the primetime soap Knots Landing. He is best known as the character David Silver on Beverly Hills (1990-2000), one of the longest-running TV shows of the 1990s. When he had time Brian appeared in a few films.

In 1996 he released a rap album called One Stop Carnival, which debuted to a publicly poor reception. The Onion, an online satire site, called the album "one of the least essential albums of the 1990s". His musical inclinations were influenced due to the fact that his father was a Country & Western artist, who took him along to his gigs. Brian can play the piano, drums, and guitar. Brian has a step-bother Keith and step-sister Lorelei.

Since you, as I did, grew up with the Terminator films, did that have you particularly psyched to do this series?

Dude, I keep reminding people that I had T2 on laser disc. — TVGuide [4]

How cool was it to join the Terminator franchise and to get to play a character so connected to the mythology?

You know, I didn't even know the character completely that I was going in for. I went in and got the sides [script pages] for the show on a Wednesday night. I went in Thursday morning [to audition] and I started working on set Friday morning, so I hadn't really read anything. I'd read sides with all the character names changed, so I had no idea, really, what was going on. It wasn't until Thursday night that I got the script. But I called all my friends who are Terminator fans like I was, and I was like, "Dude, you will never f**king believe this! I went in this morning for a show…" "What show?" "It's called Terminator: The Sarah Connor Chronicles." And my buddy was like, "What?! Dude, they're making a show about it?" I was like, "Yeah, it's awesome." He asked, "Who are you playing?" "Dude… I'm playing Derek Reese." He goes, "What?! F**king bulls**t! You just walked in and in one day you're playing Derek Reese?" I told him, "Yeah… I can't believe it."

It's awesome. It's really awesome. For anybody that's a fan of the films, I get to be the guy that comes in every episode and is like "Yeah, where are the f**king guns? Who do we have to kill?" I get to be as close to a Terminator without actually being one as anybody. I've lost my brother. I've lost everything I've known and loved in the future, and I get a chance to come back and change it. It's like who wouldn't do absolutely everything you have to do to accomplish that? So he's pretty bad ass! — IGN TV [5]

On Tom Green's internet-based talk show, he was asked: Do you have to cover up the tattoos with flesh colored makeup?

No, I have to cover up this one [refers to tattoo on his left arm], this is my son's name, and they don't want obviously any names. But no, all the rest I keep, and actually they add one more tattoo. — Tom Green's House Tonight [6] 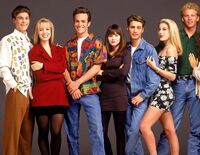 Retrieved from "https://terminator.fandom.com/wiki/Brian_Austin_Green?oldid=95500"
Community content is available under CC-BY-SA unless otherwise noted.