Former bodybuillder, stuntman, actor
Brett Azar is a bodybuilder-turned-stuntman and actor. He was the stand-in for Arnold Schwarzenegger's original T-800 and the younger version of Pops seen in the flashback, both portrayed in Terminator Genisys. He later again acted as a stand-in for younger Carl in Terminator: Dark Fate. Azar has guest-starred in acting roles for shows such as The Jim Gaffigan Show and Jessica Jones as well as appeared in movies such as Jersey Shore Massacre, Price for Freedom, Staten Island Summer and Central Intelligence.

Azar standing in as the Original T-800 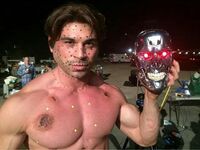 Appearing as the Guardian "Pops"
Add a photo to this gallery