Little is known about Blair's life before Judgment Day. Her father was an airline mechanic and a jet engine specialist which may explain how she became a pilot after Judgment Day. However, she also once tells Marcus that she never expected to be a pilot. Her knowledge of human anatomy suggests that she may have originally intended to become a doctor.[citation needed]

Blair was originally a pilot and a soldier in another Resistance group before joining John Connor's Tech-Com unit.

At a certain point, Blair carries a mission to destroy "The Ghost", which turns out to be a human, named Laz Howard. After seeing Laz's ability to jamming machine's signal to disable them, Blair decides to take Laz to her base.

While on routine patrol in her A-10 Warthog along with her wingman, Blair Williams is dispatched by John Connor to investigate a massive Skynet troop movement near her location. Upon arrival, she and her wingman find a Transport and shot down a HK-Aerial which escorts the Transport. Another HK-Aerial released by the Transport shot down Blair's wingman and destroy one of the engines on Blair's craft. She was forced to eject or face certain death.

After landing and being trapped on the cables, she meets Marcus Wright, who helps her get down from the parachute. Blair convinces Marcus to come to the Resistance Base with her to get help instead of risking himself on a "foolish" mission on directly going to the Skynet Central to rescue Kyle Reese and Star, who has been working with Marcus and were captured.

While hiding in the remains of a racetrack, Blair ask Marcus to find something they can burn, so that they can build a fire. After treating a wound on her shoulder while he's away, she was attacked by three men who wanted her supplies and apparently wanted to take advantage of her. Though her gun is stolen by one of them, she manages to beat two men at first. However, she got a surprising hit from behind, causing her to fall down. When the men are pleased with themselves, Marcus came to her rescue and incapacitated the three men. In anger, Blair shot one them in the right thigh with anger, then threw the medical pack to him.

Blair and Marcus build a fire and sit down near each other. Blair says that she is cold, and snuggles near Marcus — claiming she just wants body heat. Blair notices how strong his heart is. After thanking Marcus for saving her, Blair says to Marcus that you don't meet a lot of good guys these days. Marcus says he is not a good guy. Blair insists that he is and that he just doesn't know it yet. Marcus then ask her if she thinks people deserve a second chance. Blair replies "Yeah, I do," and falls asleep in his arms.

Upon arrival at the base in the next morning, Marcus was severely injured after a magnetic mine went off when walking through the minefield, in what she believed to be an accident. Soon after she and other Resistance members discover that Marcus was not human, but a machine. Kate Connor tells her that the Resistance planned to disassemble Marcus rather than let him live.

She then returns to the storage compartment and found Lieutenant Barnes shoot him in the chest for his late brother who died on a mission on Skynet VLA a few days earlier. Blair tells Barnes that John wants to see him. She shoots Marcus in order to convince Barnes to leave. After Barnes leaves, she releases Marcus and returns him the clothes. Then they start to escape. Barnes soon realizes she had lied to him and bring the force to the storage. After shooting at them with guns, Barnes uses an RPG against Marcus and Blair when the two are in the ventilation shaft connected to the silo. Marcus covers Blair with his own body. The RPG burns some of the skin off of Marcus' left arm revealing his endoskeleton. Blair touchs it and is horrified. Marcus tells her to just move.

After they exit the shaft, Marcus finds they have come to the minefield again. Blair uses a length of Primacord(detonating cord) to trigger/clear a path of mines, allowing them a safe route to the Jeep, only for it to be destroyed by another RPG. While running away and trying to dodge the bullets that are being shot at them, Blair is shot in the leg. Marcus stops and half carries, half drags her behind him urging her to get up. He asks her if she is okay and she replies, "Let's get you out of here." They shoot another RPG at Blair and Marcus. Hidden with the smoke, Blair decides to allow herself captured in order to serve as a diversion for Marcus to escape. She was placed in the brig, but Connor released her after asking how her leg was. She says that she'll live so he says to let her go, since he had spoken with Marcus and made a deal to rescue Kyle Reese.

Blair pilots the Resistance strike team to Skynet Central aboard a helicopter. After the prisoners are rescued, she then pilots the helicopter away from Skynet Central as John Connor, who is severely injured having been impaled by T-RIP, a prototype Series 800 Terminator, remotely detonates the nuclear fuel cells stockpile meant for the new Series 800 Terminator. The explosions destroys Skynet Central and the Resistance escapes. A short time later, at a field base, Kate, Marcus, Blair, Kyle, Star, and Barns stand beside John Connor's bed. John lies dying and there appears to be nothing anyone can do about it. After Kate tells them that his heart can't take it, Marcus offers his heart to replace John's. When Blair starts to object, Marcus tells her this was the second chance that he talked about. Blair and Marcus share a final kiss, then Marcus is put under and gives his life to save John. 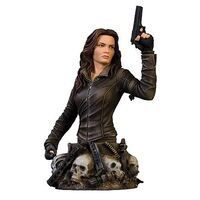 Blair suggests Marcus come with her.

Blair shoots the punk at the abandoned racetrack.

Blair looks at Marcus after he triggers a magnetic mine.

Blair lies to Barnes that Connor want to see him.