An Augment is a cybernetically-enhanced human and a type of cyborg. However, the risk of the surgery that augments a person is high.[1] Augment technology is utilized by the Resistance in the Dark Fate timeline.

An Augments is powered by a thorium reactor implanted in the body. Underneath skin, which visibly bears some long and patterned surgical scarring that spans all across the surface as testament to the high-risk procedure they were inducted into, is a secondary artificial skin that acts as armor, protecting the bones and vital organs. They can withstand shock from collision, including falling from a certain altitude, such as from a bridge to the ground.

Augments possess a HUD to analyze, search for, and target. They also possess night vision.[2]

Augments can connect to an electronic device and access data from it, such as a cellphone, simply via direct touch to its inner circuit board.

Augments' accelerated metabolism require them to take medical injections with a specific formula when "overheated" after intense battle for a few minutes to recover their strength and energy, otherwise they will "crash", "burn up", and die. During this period and unless the necessary medication has been administered, the Augment will gradually grow more disoriented overtime, even experience brief fainting episodes. In addition, water and ice can cool off their bodies during overheating periods.

When "overheating", an Augment needs a special injection composed of anti-convulsive medication, sodium polystyrene sulfonate, insulin, benzodiazepine, and possibly other drugs with a specific formula and it should be injected in the lower back or thigh.

However, Sarah Connor made an improvised version without the proper formula and injected it in the right side of Grace Harper's abdomen, doing so with some difficulty due to the strong but flexible subcutaneous armor beneath. It also worked out for Grace. 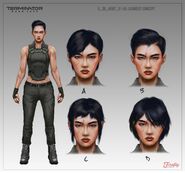 X-Ray showing structure of an Augment

Augment's HUD and targeting system, lock-on
Add a photo to this gallery

Retrieved from "https://terminator.fandom.com/wiki/Augment?oldid=105572"
Community content is available under CC-BY-SA unless otherwise noted.