Terminator Wiki
Register
Don't have an account?
Sign In
Advertisement
in: Actors, Cast/Battle Across Time, Cast/Dark Fate,
and 4 more

Bodybuilder
Actor
Politician
Arnold Schwarzenegger is an Austrian-American bodybuilder, WWE Hall of Famer, Male actor and politician notable for originating the role of the Terminator from the Terminator franchise.

Schwarzenegger's portrayal of the Terminator helped earn the character "22nd greatest villain" and "48th greatest hero" of the last 100 years in film on AFI's "100 Years, 100 Heroes and Villains" list.[1]

Schwarzenegger played the title role in the 1984 film The Terminator, and reprised the role in the 1991 sequel, Terminator 2: Judgment Day and the 2003 follow up, Terminator 3: Rise of the Machines. He also lent his voice and a CG model of his face to the 2009 film Terminator Salvation, to be used in conjunction with Roland Kickinger's body as the T-800.[2] On April 26, 2011 it was announced that Pacificor, then-current rights holder to the Terminator franchise, was seeking distributors for a possible Terminator sequel with Arnold Schwarzenegger signed to star.[3] Although he gained a respectable cult following for his portrayal as Conan the Barbarian in two films, it was his role as the Terminator that made him a star. He portrayed Guardian in the film Terminator Genisys, which was meant to be the start to a new trilogy. Schwarzenegger later portrayed Carl in Terminator: Dark Fate, a direct sequel to Terminator 2: Judgment Day.

Schwarzenegger served as the 38th Governor of California of United States of America. Schwarzenegger has been nicknamed "The Governator" since, a portmanteau of Governor and Terminator, referring to his internationally popular film role.

Schwarzenegger freely admits to steroid use in his early bodybuilding career. He insists, however, that they were "legal" at the time. Arnold also maintains, to this day, a friendly rivalry with fellow actor/bodybuilder Lou Ferrigno, whom he affectionately refers to as "Big Louie". 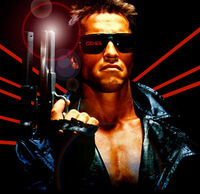 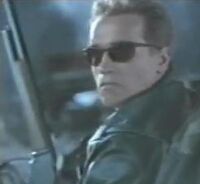 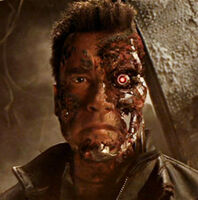 T-850
Terminator 3: Rise of the Machines 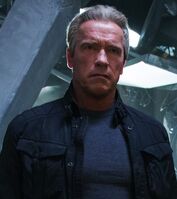 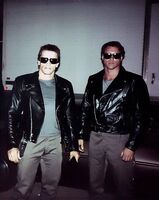 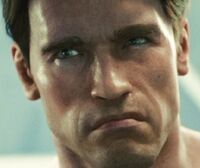 Arnold's face used as the T-800's with digital makeup techniques. 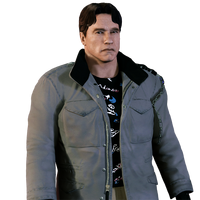 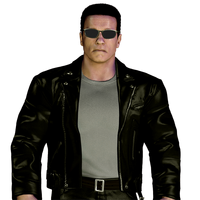