Brendan Hines
Andrew "Andy" David Goode was the inventor of a chess-playing computer known as the "Turk", an artificial intelligence program that later became Skynet.

As a 15-year-old computer programming savant and chess enthusiast, Andy was a summer intern at Cyberdyne Systems at the time Miles Dyson was still alive. Miles liked the young precocious Andy for being bold, daring and innovative when others could not or would not. Later, Andy studied computer science at CalTech 3 but never obtained his degree; he had to drop out in his senior year because his father died and he had to take care of his mom, who had become emotionally disturbed. "The Turk"

After Judgment Day, Andy went by the name "Billy Wisher" and joined the Resistance. He became close to Derek Reese.[1] In 2027, while captured by the machines, Andy revealed to Derek Reese that he was the creator of the Turk — an artificial intelligence later became Skynet, along with the work of about dozen other confederates. Andy feels guilty for his involvement and pleads for forgiveness. Due to feeling guilty for what happened on and after Judgment Day, the constructor of the Turk indicates his accordance to Derek's mission to eliminate him in the past and in advance provided him forgiveness for the genocide. "Dungeons & Dragons"

Finding files at the Resistance fighter safe house containing pictures of Andrew Goode, Sarah Connor decided to go and find Andy. Sarah met him while buying cell phones and they had dinner together that night. He showed her the Turk, a chess playing machine, and Sarah realized that this highly adaptable program might be the precursor to Skynet. Sarah developed feelings for Andy and scolded Cameron for having the idea to kill Andy. She knew that she might have to kill Andy to stop Skynet, but she wanted to find an alternative method. Sarah decided to destroy the Turk by setting Andy's house on fire. "The Turk"

However, Andy quickly built "Turk 2", one that was much more advanced, and entered it in a chess tournament in which the winner would gain a military contract. Before the match, Andy introduced Sarah to Dmitri Shipkov, his business partner. After losing to the Japanese team, Andy was killed by Derek Reese. "Queen's Gambit" 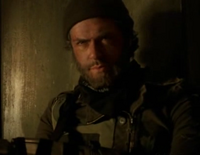 An aged Goode going by the alias Billy Wisher 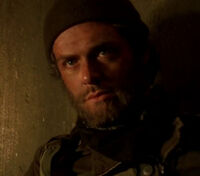