In "Born to Run", an alternate Allison is introduced.
Allison Young (born 22 July, 2008) is a girl living in the Future War. After Judgment Day, she was supposedly chosen by John Connor to perform unknown missions, but was captured by a Terminator; the machines tried to reach John Connor by creating a Terminator replacement of Allison and sending this doppelganger back to John in her stead.

"I'll never help you get to John Connor!"
- Allison Young.

Allison is initially shown to be both timid and fearful, which is to be expected considering the world she's grown up in. However, she also displays a strong resolve and is shown to be very brave when cornered by the machines on the aircraft carrier. She also defiantly refuses to eat their food, despite it being "proper food" and not "garbage". During her interrogation sessions, Allison complies with the machine's demands and answers all of their questions, all the while biding her time for an escape attempt.

Allison is also shown to be very sly, and almost tricks Cameron into approaching the Resistance camp without a bracelet pass. When Cameron calls her on her deception, Allison simply smiles mischievously up at the machine. She is very loyal to John Connor and vows with her last breath that she will never betray him. It is hinted throughout the interrogation that Allison is possibly exceptionally close to John, and she angrily screams at Cameron when the machine mentions wanting to meet him.

Allison was born July 22nd 2008 to Claire Young and her as-of-yet unnamed husband in Palmdale, California. Her mother was a music teacher who enjoyed spending her free hours listening to Chopin. Her father was an architect who taught her to draw when she was little. Allison had her last birthday party in Griffith Park, which all of her friends attended and she expressed an interest in a boy's silver mountain bike (asking her father to get her one for next year).

She never celebrated her birthday the following year, however, as both her parents and two thirds of the human population were wiped out in the nuclear fire of Judgment Day.

Note: It is unknown how Allison, being no older than three at the time, survived this event or what happened to her in the dark years between Judgment Day and her capture by the machines. Palmdale being the other side of the mountain range to Los Angeles, probably shielded her from the missile blasts, which would be aimed at major cities.

Allison grew up living in Resistance bunkers and eating "garbage" for dinner. It is unknown whether she was an active member of the Resistance, or if she was simply a civilian survivor. Either way, Allison was "chosen" by John Connor and given an identification bracelet for authorized access to his secret camp, a privilege only bestowed to a few, typically those whom John trusted completely. This implies Allison to be of the former. Her apparent closeness to John may have explained why John mostly chose only to confide in Cameron after she was reprogrammed.

Allison was discovered by machines while hiding in a Resistance bunker. She was forced to flee by a pursuing terminator but was captured in a net before she could escape the machine. Allison was then taken to a prisoner camp aboard an aircraft carrier and imprisoned there for an undetermined amount of time. During her imprisonment, she was entered into databases for use as a model for a specific Terminator's infiltration sheaths. A dedicated program of interrogation was pursued in an attempt to create a perfect cover for her replacement, but Allison was able to withhold critical information in an attempt to protect John Connor. Her interrogation was conducted by a Terminator who kept itself hidden within the shadows while a T-888 enforcer unit branded Allison with a barcode, causing the girl to comply to the machine's demands and confirm her name.

Locked in her cell, Allison refused to eat the food she was offered, despite its healthy appeal. During her interrogation sessions, the mysterious machine questioned her about her life and family. Keeping an eye on the ajar door, Allison divulged intimate details on her parents and childhood, dissolving into tears upon recalling their deaths on Judgment Day. The interrogator inquired as to the metal bracelet Allison wore on her left arm, but she simply lied and told the machine that it was a gift from her non-existent "sister".

Emotionally overwrought, Allison expressed a desire to "go home" and revealed her birthplace to the machine before bolting for the open door and escaping the interrogation chamber. Allison fled down several corridors in a desperate attempt to find an exit and eventually locked herself in a cargo hold. To her horror, the room was packed with human prisoners in giant cages, as well as other large mammals, including apes, bears, and tigers.

She found a hatch to the carrier's exterior and tried to find a way off the boat, but was forced to jump from the deck and crashed into the sea below. Despite surviving the fall, Allison was promptly captured again by a perimeter net and raised back to the surface. She was then escorted back to the interrogation room where the Terminator leading her questioning revealed itself at last, shocking Allison with its new infiltration sheath. The Infiltrator, later known as Cameron, had been equipped with a skin model that was exactly identical to Allison in every way.

The machine told Allison that she was not her enemy and that she was part of a faction who wanted to end the war between man and machine. Allison was not fooled, however, and refused to disclose the location of John's camp. Sometime later, however, Allison apparently gave up the camp's location, but withheld her knowledge of the bracelet pass. The Infiltrator later returned to the prison and showed Allison a collection of bracelets identical to her own, all found on the bodies of captured prisoners.

Knowing that she was caught in a lie, Allison simply responded by smiling in satisfaction at the machine. Perturbed by Allison's attempt against her mission, the machine grabbed the girl by the neck and held her aloft. Allison swore she would never betray John Connor, after which it snapped her neck, musing "You already did" before taking her bracelet and leaving to infiltrate John's camp in Allison's place. "Allison from Palmdale"

Following the deactivation of Cameron at the hands of John Henry, John Connor and Catherine Weaver jumped to 2027. However, this was an alternate timeline where John Connor never became leader of the Resistance. There, they found Allison Young alive and well with Derek and Kyle Reese. "Born to Run"

"You're very brave. That must be why he chose you."
- Cameron.

Allison was a member of the Resistance who apparently had some close connection to John. She was one of a few who were given special ID bracelets that allowed her access to John's secret camp, placing her in a position of trust and importance. While being interrogated by Cameron, Allison defiantly refused to betray his location. Though she apparently gave in to Cameron's demands, Allison was sly enough to almost trick Cameron into approaching the camp without the ID bracelet, which would have resulted in her immediate failure. Cameron commented that John "chose" her. Though Cameron may have been referring to Allison's privileged access to the camp, it seems unlikely, given that Cameron had yet to discover the bracelet's significance. This presents the possibility that Allison and John may have had a close relationship, though the nature of said relationship remains unclear.

Cameron: What's your name?
Allison: My name? Why should I tell you?
Cameron: If you don't, we'll give you one.
Allison: Go ahead. I'm dying to hear it.
(A Terminator brands a barcode on Allison's arm)
Allison: Allison! Allison Young!

Cameron: Where are you from, Allison?
Allison: I don't remember.
Cameron: You don't remember what town you're from?
Allison: Why does it matter? It's not there anymore.
Cameron: Tell me about your life.
Allison: I live in a tunnel. I eat garbage for dinner.
Cameron: Tell me about your family.
Allison: My father was an architect. He taught me how to draw. My mother was a music teacher. She'd sit for hours and listen to Chopin.
Cameron: What's that bracelet on your arm?
Allison: My sister gave it to me for my birthday. July 22nd. I had a party in Griffith Park. My friends were there. I saw a boy ride by on a silver mountain bike, and I told my Dad: "That's what I want". And he said: "Next year". But I didn't have a party the next year. No one did.
Cameron: Why not?
Allison: Everyone was dead. (starts to cry) I wanna go home.
Cameron: Where is home?
Allison: Palmdale.

Cameron: You shouldn't have run. You're just making things worse for yourself... Your hair, it's so pretty. We work very hard on the hair... to get it right. I'm not your enemy.
Allison: Right.
Cameron: I want to get to know you. You're very brave. That must be why John Connor chose you.
Allison: I don't know what you're talking about.
Cameron: I admire him. His determination, his spirit, his fearlessness. I'd like to meet him.
Allison: He wouldn't want to meet you!
Cameron: They're going to kill you. They're going to kill every one of you. They'll hunt you down until every human is gone and you're extinct.
Allison: Why are we having this conversation?
Cameron: Because some of us don't want that. Some of us want peace. You were chosen, Allison. Not just by John Connor. By us. Tell me where his camp is.

Cameron: You lied to me.
Allison: I told you where the camp was.
Cameron: You told me your sister gave you that bracelet.
Allison: What does that have to do with anything?
Cameron: We found these on some of your friends. (Cameron drops several identical bracelets on the table)
Cameron: Why are you all wearing them? It has something to do with the Connor camp.
Allison: No.
Cameron: It's a pass! To get into the camp. You were going to send me there without it. They would've known what I was. (Cameron grabs Allison by the neck) You lied to me.
Allison: I'll never help you get to John Connor.
Cameron: (Cameron snaps Allison's neck and takes her bracelet) You already did. 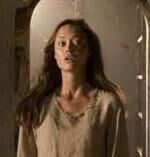 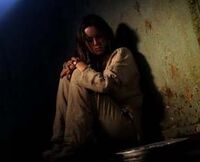 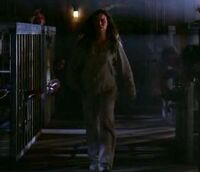 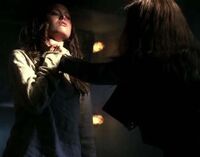 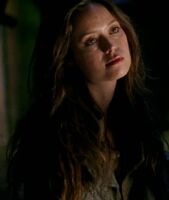 Allison is given a barcode tattoo by a Terminator
Community content is available under CC-BY-SA unless otherwise noted.
Advertisement