The name or term "Alex" should not be confused with Alex Lopez.

Alex is the physical embodiment of Skynet, housed in a T-5000 Terminator from an unknown alternate timeline. It infiltrates the Resistance unit Tech-Com.

Near the end of war in an unknown alternate future, Skynet developed the T-3000, a human turned into a Machine-Phase Matter Terminator. It later uploaded itself into a T-5000 Terminator and travelled to 2029 of the Original timeline in order to stop John Connor. At a certain point after its arrival, Alex infiltrated Connor's Tech-Com unit and participated the assault on Time Displacement Device in Los Angeles.

After Connor's unit reached the Time Displacement Chamber, Kyle Reese volunteered to travel to 1984 to save young Sarah Connor. When Connor was seeing Reese off, Alex attacked Connor. While Connor was turning into a T-3000 Infiltrator, Alex killed all the other Tech-Com members and revealed that he was Skynet itself. After brainwashing John Connor, Alex then sent him to the alternate 2014 in order to ensure its counterpart's creation, which would be known as "Genisys". Terminator Genisys

It is alleged that at a certain point after the destruction of the Skynet Core in Colorado, Alex re-initiated itself as Skynet and continued its war against humans. Terminator Genisys: Future War

As John Connor brought the source code and future knowledge to Cyberdyne Systems in the alternate 2014, the company was able to restart the Skynet project, now under the name "Genisys", which would be fully online in 2017.

Unknown to Cyberdyne Systems, John had been secretly providing "knowledge" — possibly the will of Alex — to Genisys, making the AI become a continuation of Alex.

In 2017, when the Genisys Program started becoming whole, Alex's image is used as one of the the holograms to represent Skynet itself in Cyberdyne Systems Headquarters in Skynet's oldest and thus most evolved form. Upon seeing Skynet's hologram in the form of Alex, Kyle recognized him as the thing that had attacked John before he went into the Time Displacement Field. Terminator Genisys 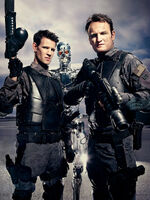 Retrieved from "https://terminator.fandom.com/wiki/Alex?oldid=102771"
Community content is available under CC-BY-SA unless otherwise noted.